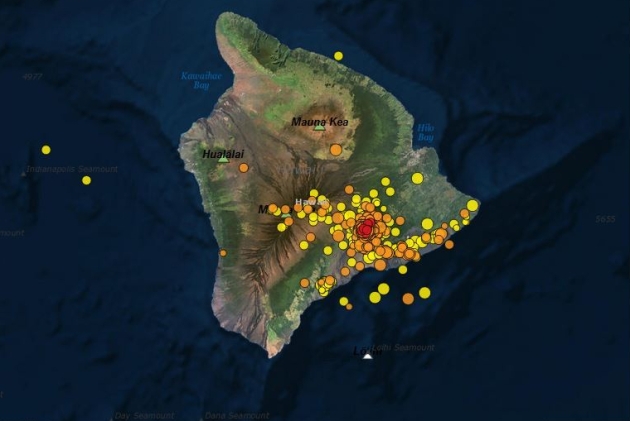 The eruption in the lower East Rift Zone (LERZ) continues with no significant change during the past 24 hours.

Fountains from Fissure 8 spatter cone continue to supply lava to the open channel with intermittent small, short-lived overflows. These overflows rarely extend beyond the existing flow field. No active overflows were observed during this morning’s helicopter overflight.The spatter cone is now about 55 m (180 ft) tall at its highest point, and fountains rarely rise above that point. At the coast, the northern margin of the flow field is still oozing fresh lava at several points in the area of Kapoho Beach Lots. Lava was entering the sea over a broad area this morning primarily on the northern side of the entry area. As shown by yesterday’s thermal map of the flow field, the lava channel has crusted over about 0.8 km (0.5 mi) inland of the ocean entry; lava is moving beneath the crust and into still-molten interior of earlier flows before it enters the sea in multiple oozeouts.

Pele’s hair and other lightweight volcanic glass fragments from the lava fountain at Fissure 8 continue to fall downwind of the fissure, dusting the ground within a few hundred meters (yards) of the vent. High winds may waft lighter particles to greater distances. Residents are urged to minimize exposure to these volcanic particles, which can cause skin and eye irritation similar to volcanic ash.

The most recent map of lava flows can be found at https://volcanoes.usgs.gov/volcanoes/kilauea/multimedia_maps.html

HVO field crews are on site tracking the fountains, lava flows, and spattering from Fissure 8 as conditions allow and are reporting information to Hawaii County Civil Defense. Observations are also collected on a daily basis from cracks in the area of Highway 130; no changes in temperature, crack width, or gas emissions have been noted for several days.

Volcanic gas emissions remain very high from Fissure 8 eruptions. Continuing trade wind conditions are expected to bring VOG to the southern and western parts of the Island of Hawaii. VOG information can be found at https://vog.ivhhn.org/

The ocean entry is a hazardous area. Venturing too close to an ocean entry on land or the ocean exposes you to flying debris from sudden explosive interaction between lava and water. Also, the lava delta is unstable because it is built on unconsolidated lava fragments and sand. This loose material can easily be eroded away by surf, causing the new land to become unsupported and slide into the sea. Additionally, the interaction of lava with the ocean creates “laze”, a corrosive seawater plume laden with hydrochloric acid and fine volcanic particles that can irritate the skin, eyes, and lungs.

Magma continues to be supplied to the Lower East Rift Zone. Seismicity remains relatively low in the area with numerous small magnitude earthquakes and low amplitude background tremor. Higher amplitude tremor is occasionally being recorded on seismic stations close to the ocean entry.

Additional ground cracking and outbreaks of lava in the area of the active fissures are possible. Residents downslope of the region of fissures should heed all Hawaii County Civil Defense messages and warnings.  HVO

Sulfur dioxide emissions from the volcano’s summit have dropped to levels that are about half those measured prior to the onset of the current episode of eruptive activity. This gas and minor amounts of ash are being transported downwind, with small bursts of ash and gas accompanying intermittent explosive activity. HVO 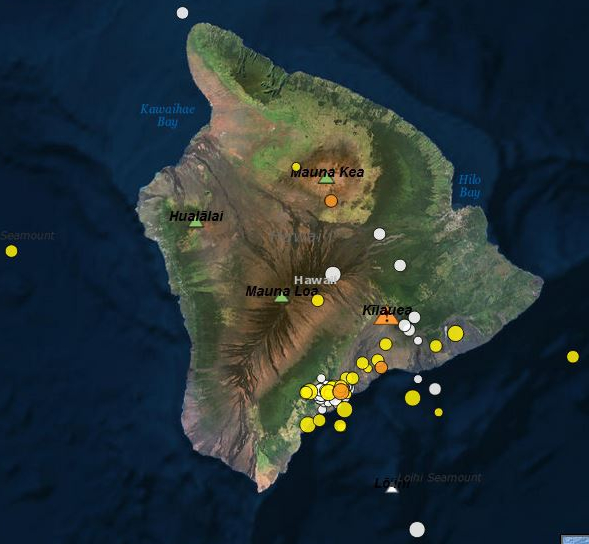