gravity is a myth

The Earth sucks or does it?

Gravity causes exactly the same warpage as charge fields in atomic structures. Gravity behaves exactly the same as charge fields as to effects over distance. Charge fields are created by gravity. The potential for acceleration in an earth gravity field is 32ft per second for each second of acceleration, the charge field of earth is an linear accelerator. Investigations conducted in the 1800s established an average charge field of 300 volts per meter average in dry air. In a boring week I created a number of gravity batteries of oil, paper and foil. In all cases the batteries were positive on top and negative on the bottom. The voltage over distance was about .50 milivolts per 10 mils or 300volts over 1 meter. This was dielectric warpage as in a condenser, no current flow measured as this was a device to measure potential created by gravity. Do not confuse voltage potential with current flow! You have to gather the charge bodies as well as develop potential and create a controllable current flow as well as allow for recharge of the device. Dielectric warpage is the displacement of the nucleus from the center of the electron shell. The electron shell is the atomic surface and the nucleus the atomic mass or center of gravity. Whether gravitational fields or electrical charge fields the effect is the same, atomic warpage, ………..  for more of this post.On gravity 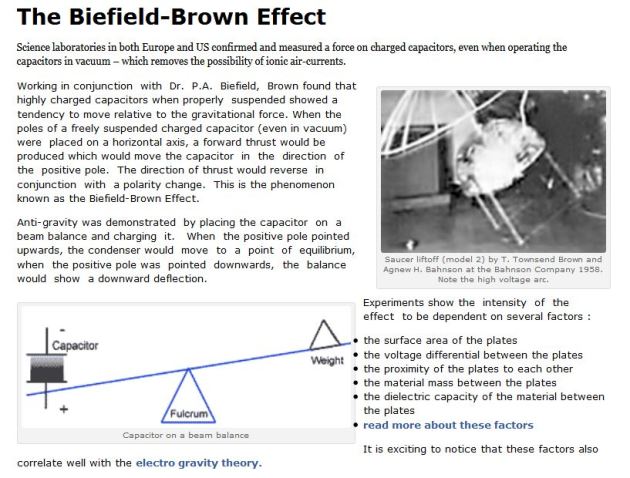 Electro-static forces within a charged capacitor warp the diaelectric of the atoms within the space between the plates, just as gravity would, creating the potential for acceleration as gravity does. This creates the possibility of creation of artificial gravity between 2 charged plates. …pg

4 responses to “gravity is a myth”